Debates and discussion today are marred by talk past each other and pushing misinformation or logical fallacies, often obscured or hidden.

Attorney, skilled in the art of persuasion and logical analysis.

By breaking up and tagging discussions into smaller points we can, as a community, strengthen arguments, isolate weak points and build consensus.

I attached an imgur link with a mockup of what I am talking about, I will expand on that here. https://imgur.com/wlrw2ZL

So, in the example the poster describes what they see as issues with bitcoin and etheruem. By default, each sentence and paragraph will be a distinct object that can be “debated” which includes: voted on, disputed, “expounded on” and each subsequent meta statement can also be debated on. Ideas can also be tagged so discussion from previous debates can be referred back to or imported.

Highlighted in green in the example paragraph are ideas that the community strongly agrees on (high gas fees on etherueum) while others are color-coded which indicates the point is disputed and links to further discussion. One sentence has two points and has been broken into two different discussion points. In yellow, a reviewer disputes the claim about bitcoin while in brown a more interesting sub-discussion has broken on out how we should define what level of gas fees are acceptable in transactions. Below the three proposed definition of what “high” gas is, there are columns with arguments in favor and in opposition to each definition.

Metatagging the discussions allow for a better shared understanding and ability to build on foundational knowledge. By tagging concepts, both the author and the reader will be made aware of other related ideas which can be compared against or integrated into the discussion, perhaps even prior to publication.

Tagging concepts and tracking support for ideas will build consensus. Over time as users interact with the federated debate ecosystem, data will be collected to show what topics are trending, what the majority of Cardanians believe in, areas of major disagreement and so forth.

The initial phase of the project will be to propose a challenge for both design and build out of the system.

Which of these definitions apply to you? Other/Prefer not to say

imgur.comImgur: The magic of the Internet 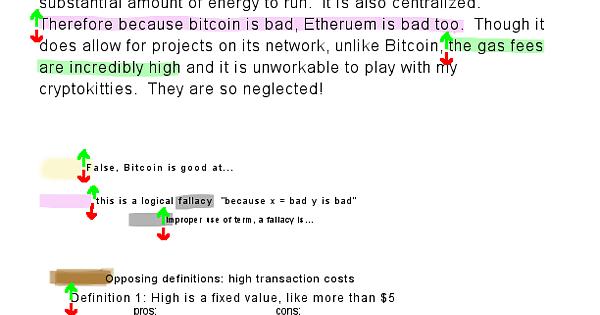